“There’s something about the human spirit that when you accept challenge and work on it and have deadlines and capture your potential, it’s astounding what you can do,” John Goddard said in a Dateline NBC interview during the 1990s.

Most of us have wild dreams for our lives when we are children. But through the process of “growing up” into adulthood, we’re taught to be “realistic.” Get a real job, set our sights low, live vicariously through action heroes on television and in the movies. Imagination becomes the first casualty.

John Goddard was a man who never gave up on his childhood dreams. In fact, he devoted his entire life to pursuing them. 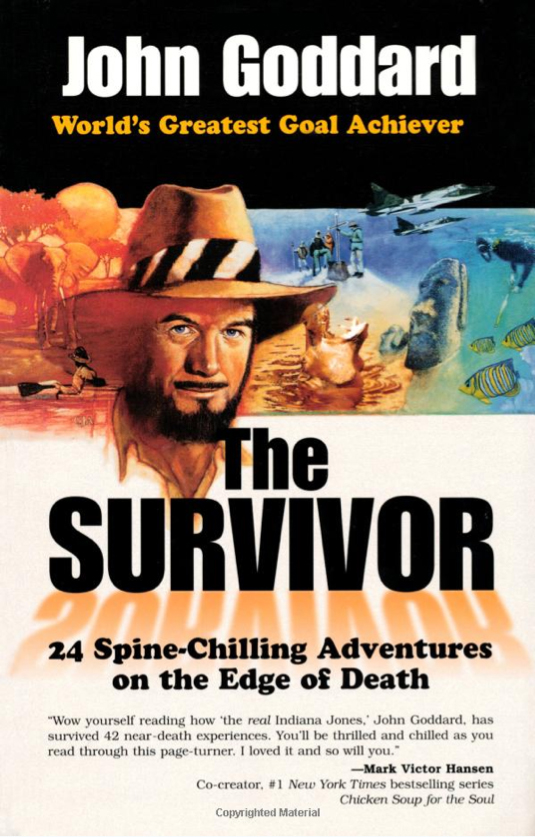 It reads like something out of a story book: in 1940, when Goddard was 15 years old, he overheard his father’s friends complaining that they had never done the things that they dreamed about doing. It seemed obvious to him: adults were letting their lives slip past them. Goddard decided he wouldn’t make the same mistake.

At the tender age of 15, a time when most of us don’t even know who we really are yet, he took charge and wrote down a list of things he kicked the bucket. At the time of his passing at the grand old age of 88, seventy-three years after he compiled his list, Goddard accomplished 120 of the 127 lifetime goals that he had set for himself.

Many people take years, sometimes a lifetime, to figure out what they want to accomplish before they kick the bucket.

To put things into perspective: Henry Ford hadn’t completed the automobile assembly line that he was known for until he was 60. Colonel Sanders was in his sixties when he successfully founded and franchised Kentucky Fried Chicken, one of the most successful franchise operations in history. Before founding KFC Sanders worked as a fireman, a street car conductor, a steam boat operator, gas station operator, insurance salesman, and a farmer. Harry Bernstein wrote his best-selling memoir “The Invisible Wall” when he was 93.

Goddard himself started young but kept going well into his later years, commenting, “age is only important in terms of wine and cheese… The man who taught me to hang glide was 76 at the time.”

John Goddard was ahead of the curve, and he never wavered from the path he set in his youth. 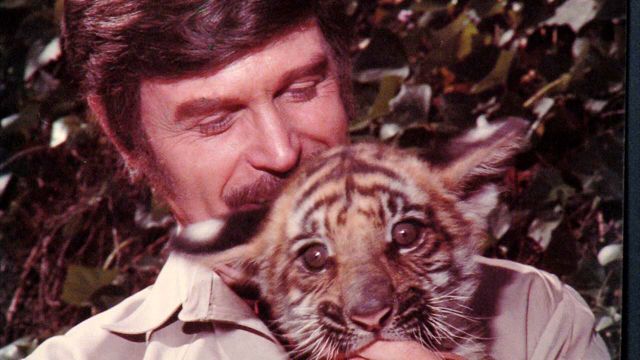 “Throughout his adventures, he has been bitten by a rattlesnake, charged by elephants and trapped in quicksand. He has crashed planes, and almost drowned twice in pursuit of his dreams.”

After his service in the Army Air Forces in World War II, Goddard immediately began pursuing his goals in earnest.

In 1951 he became the first man in recorded history to navigate the entire 4,220 mile length of the Nile, despite repeated warnings of local experts who begged him not to go. None of them expected that he would return alive. The trip lasted 9 months and Goddard was often hundreds of miles away from the nearest village, immersed amongst nature and co-existing side by side by wild beasts. He encountered a number of perils during the excursion, such as crocodiles, thunderstorms, fierce rapids, and even river pirates.

For many people, a trip like this would have been a high point of their lifetime. Indeed, the LA Times at the time called his Nile trip “the most amazing adventure of this generation.” Goddard was only getting started, though.

A few years later he completed an even more perilous trip, navigating the length of the Congo river. Then, among other things, he re-traced the journeys of Alexander the Great and Marco Polo, climbed most of the world’s tallest peaks, circumnavigated the globe four times, and lived amongst tribal peoples in every continent, and more. 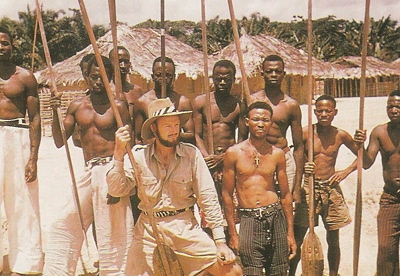 John with the Walengola tribe in Africa. Goddard earned the respect of locals
by being one of them. “Black or white, there was no difference,”
he said. “We were just buddies.”

In a video, Goddard explains that when he interacted with primitive cultures in rural pockets of the globe, he left behind any pretenses and always tried to become one of them. If you give up a hint of feeling superior to them, he said, they’ll pick up on that, and it prevents them from getting to know you.

I share Goddard’s views. I’ve always found that to be one of the most rewarding things about traveling – interacting with locals in different parts of the world – and doing so as equals. While it’s true that our financial means may be worlds apart – we’re all just people sharing this one world. I think it’s important to show respect for each and every person regardless of circumstances; showing it is also the best way to earn it in return.

Goddard acknowledges that more than once, he found himself in over his head and admits to his own recklessness. However, his many close brushes with death filled him with a supreme sense of awe and gratitude to the supreme force that kept him alive. Coming face to face with his own mortality also taught him well how to embrace his one life, his goals, and make the utmost of the present moment.

In addition to his adventurous pursuits, Goddard had many personal achievement goals such as: reading the entire Encyclopedia Brittanica (and the Bible), run a five-minute mile, learn French, Spanish, and Arabic, learn how to fence, play the piano, flute, and violin, build his own telescope, milk a poisonous snake (!), write a National Geographic article, read works by all classical authors, and so much more.

“Most people say ‘some day I’ll do that,’ and it ends up ‘if only I’d done that.’
I believe in taking control of your life and making it really important, and having some substance and meaning to it.” -John Goddard

Mr Goddard’s long list of adventures and accomplishments is so impressive that it’s almost hard to believe that it was all the work of one person, in a single lifetime. It could be argued that during his 88 years on this planet Goddard experienced a hundred different lives. As a matter of fact, he must have put cats and their nine lives to shame with his daring feats of survival: Goddard survived 42 life threatening experiences.

Goddard was attacked by vicious hippos and crocodiles, bitten by a poisonous snake, charged by a rampaging elephant and rhino, almost buried alive in a blinding sandstorm, shot at by Egyptian river pirates, stoned by a mob of hostile natives, survived desert temperatures of over 140 degrees, weakened by malaria and dysentery, and trapped in quicksand. He has survived a plane crash, been caught in earthquakes, and almost drowned four times while running rapids and deep sea diving.

Goddard learned many lessons through his experiences and forays into the unknown.

The greatest lessons that Goddard wished to pass on to others were:

1. Dream big. We can accomplishment far more than we give ourselves credit for.

2. Write your goals down. Make them real, make them permanent. Writing things down substitutes for memory.

3. Lift up others. Goddard believed that he learned something from every person he met, and sought to share his own gifts in turn.

4. Love everyone. Be compassionate and loving to all the world’s creatures.

5. Live true to your principles. Be brave, adventurous, and embrace your one life to the fullest.

One thing that separates people who are truly aligned with their purpose and mission in life is that it permeates every fiber of who they are, and reflected even in the small gestures of their every day life. A man who befriended and traveled with Goddard later in life, Dan Thurmon, says that at the end of a conversation Goddard never said “goodbye.” He always ended each conversation by saying “to be continued.” For a man who spent his entire life continually pursuing his life’s goals, it seems fitting. That was Goddard’s way of saying the adventure was never finished, and like his adventures his friendships picked up just right where they left off.

Are you ready to start living the adventurous life? There’s no pomp or ceremony required – you can start writing down your bucket list now. A great website to find bucket list ideas is Wishberg.com. It’s a site where other bucket listers upload their bucket list goals and ideas.

(We’re in no way affiliated with Wishberg.com) 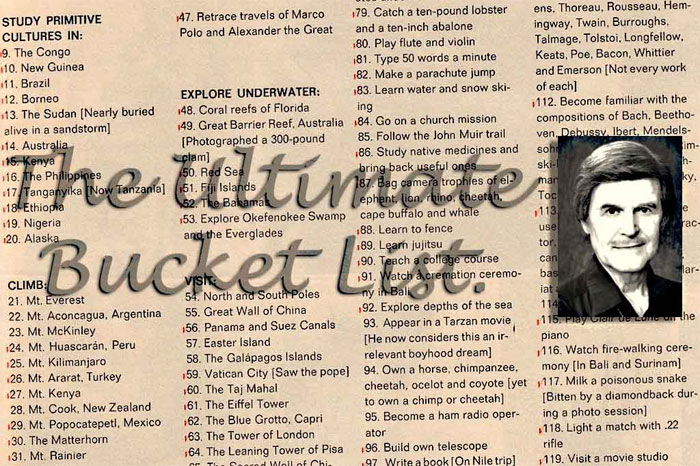 “Twenty years from now you will be more disappointed by the things that you didn’t do than by the ones you did do. So throw off the bowlines. Sail away from the safe harbor. Catch the trade winds in your sails. Explore. Dream. Discover.” -H Jackson Brown Jr.

ACCOMPLISH:
• Become an Eagle Scout (√)
• Dive in a submarine (√)
• Land on and take of from an aircraft carrier (√)
• Fly in a blimp, balloon and glider (√)
• Ride an elephant, camel, ostrich and bronco (√)
• Skin dive to 40 feet and hold breath two and a half minutes underwater. (√)
• Catch a ten-pound lobster
and a ten-inch abalone (√)
• Play flute and violin (√)
• Type 50 words a minute (√)
• Make a parachute jump (√)
• Learn water and snow skiing (√)
• Go on a church mission (√)
• Follow the John Muir trail (√)
• Study native medicines and bring back useful ones (√)
• Bag camera trophies of
elephant, lion, rhino,
cheetah, buffalo and whale (√)
• Learn to fence (√)
• Learn jujitsu (√)
• Teach a college course (√)
• Watch a cremation ceremony in Bali (√)
• Explore depths of the sea (√)
• Appear in a Tarzan movie (he now considers this an irrelevant boyhood dream) (x)
• Own a horse, chimpanzee, cheetah, ocelot, and coyote (yet to own a chimp or cheetah) (x)
• Become a ham radio operator (x)
• Build own telescope (√)
• Write a book (On Nile trip) (√)
• Publish an article in National
Geographic Magazine (√)
• High jump five feet (√)
• Broad jump 15 feet (√)
• Run mile in five minutes (√)
• Weigh 175 pounds stripped (still does) (√)
• Perform 200 sit-ups and 20 pull-ups (√)
• Learn French, Spanish and Arabic (√)
• Study dragon lizards on Komodo Island (Boat broke down within 20 miles of island) (x)
• Visit birthplace of Grandfather Sorenson in Denmark (√)
• Visit birthplace of Grandfather Goddard in England (√)
• Ship aboard a freighter as a seaman (√)
• Read the entire Encyclopedia Britannica (has read extensive parts in each volume) (x)
• Read the Bible from cover to cover (√)
• Read the works of Shakespeare, Plato, Aristotle, Dickens, Thoreau, Rousseau, Conrad, Hemingway, Twain, Burroughs, Talmage, Tolstoi, Longfellow, Keats, Poe, Bacon, Whittier, and Emerson (not every work of each) (√)
• Become familiar with the compositions of Bach, Beethoven, Debussy, Ibert, Mendelssohn, Lalo, Liszt, Rimski-Korsakov, Respighi, Rachmaninoff, Paganini, Stravinsky, Toch, Tschaikosvsky, Verdi (√)
• Become proficient in the use of a plane, motorcycle, tractor, surfboard, rifle, pistol, canoe, microscope, football, basketball, bow and arrow, lariat and boomerang (√)
• Compose music (√)
• Play Clair de Lune on the piano (√)
• Watch fire-walking ceremony (In Bali and Surinam) (√)
• Milk a poisonous snake (bitten by diamondback during photo session) (√)
• Light a match with .22 rifle (√)
• Visit a movie studio (√)
• Climb Cheops’ pyramid (√)
• Become a member of the
Explorer’s Club and the
Adventure’s Club (√)
• Learn to play polo (√)
• Travel through the Grand
Canyon on foot and by boat (√)
• Circumnavigate the globe (four times) (√)
• Visit the moon (“Someday, if God wills”) (x)
• Marry and have children
(has five children) (√)
• Live to see the 21st century (√)

This error message is only visible to WordPress admins
Error: No posts found.