After our trip to the Ukraine, a few of in our group flew to Greece for a post-trip visit to the reclusive Mt. Athos, a World Heritage Site on a peninsula pointing across the Aegean Sea facing the rising sun. Home to 20 Eastern Orthodox monasteries, Mount Athos is a self-governed monastic state within the sovereignty of the Hellenic Republic. A sacred location to Eastern Orthodox Christianity, the temple has very tight controls on visitation, and accessing it was a long-standing goal of mine. We flew to Thessaloniki where we were met by a driver for the two-hour trip through the Greek countryside and small villages before arriving at Ouranoupolis, a fishing village and the departure point for all visits to Mt. Athos. 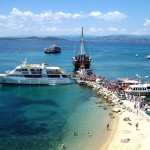 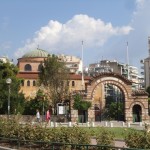 Entrance to the city centre in Thessaloniki 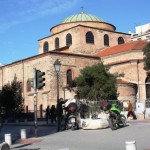 Tower of Andronikos, the “alert protector” of Ouranopolis 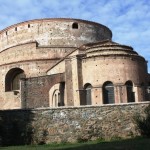 “The Rotunda of St George,” the oldest church in Thessaloniki 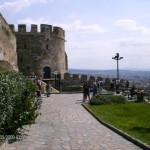 The castle at Thessaloniki

According to tradition, the Virgin Mary was shipwrecked on Mt. Athos on her way to Cyprus to visit Lazarus. Overwhelmed by the wonderful wild natural beauty of the mountain, she gave it her blessing and prayed that it be her garden. Since that moment, the mountain was consecrated as the “garden of the Mother of God” and became off-limits to all other women. No women are allowed to visit and only males over 18 years of age can stay overnight or live there. A $30 visitor’s permit must be purchased ahead of time from offices in Ouranoupolis. All accommodations on Mt. Athos are in the monasteries. Advance reservations are required but are frequently lost in the shuffle, making the entire experience all the more an adventure. 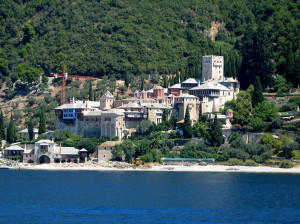 View of a monastery at Mount Athos from the sea

On our scheduled departure day, taking only hand luggage, two of us proceeded to the dock with our ferry tickets. Unable to get on the faster speed boat, the trip took two hours to reach Daphines, the only point of entrance to Mt. Athos. It was unorganized chaos as we tried to find our previously-scheduled minivan to take us to the first monastery. When the dust finally cleared, literally, we somehow found ourselves in the back of a Toyota truck heading down a bumpy dirt road, eventually stopping at the top of a hill. The driver pointed to a cow path. With trepidation, we scrambled down it to the gates of a castle, the St. Andreas Skiti monastery, where a meal was about to be served.

It felt like entering a soup kitchen on skid row as we marched behind the monks and priests into the cavernous, dark dining hall. During meal time the hall is completely silent as all meals are accompanied by continuous prayer reading. During that first dinner we were treated to a tasty, giant piece of halibut, leading us to make the erroneous assumption that the food would be good during our pilgrimage. However, we found that when we expected anything on Mt. Athos to remain the same, it never did. Following this principal, the quality of our remaining meals at Mt. Athos went rapidly downhill. A few hours after dinner, the registration office opened and we were assigned a Spartan room with 4 beds with a WC down the mosaic-lined hall. 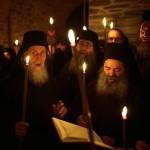 Monks chanting prayers at Mount Athos. The life of monks here is divided into 3 parts: prayer, rest, and work. 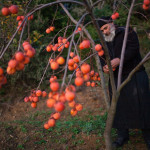 A monk at work at Mount Athos. The life of a monk at Mt Athos is divided into 3 parts: prayer, rest, and work. 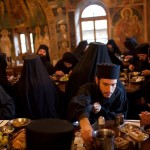 A group of monks at Mount Athos silently eating breakfast. The life of a monk is divided into 3 parts: prayer, rest, and work.

If you are a female and have read this far, you may be appalled that you cannot visit Mt. Athos. Let me assure you that it is completely lacking in comfort. Sleeping accommodations are shared in dormitories and there are no amenities. Most facilities provide only floor toilets and are without bathing facilities in spite of the heat and dust. Mirrors are rare. There is no coffee. If rated by stars, these accommodations would be minus two or three, very basic and uncomfortable. One visits Mt. Athos as a pilgrim, not for vacation or site-seeing. Everything seems to be desiring repair to the point that some places reminded me of scenes of Berlin after the War. The disorganization, chaos, long waits and uncertainty involved in moving from place to place are nerve-wracking, but daily movement is required since a person can only stay in each monastery one night. 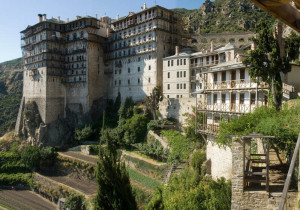 Mt. Athos does not follow the civil clock used by the rest of Greece but rather uses Byzantine time. Their liturgical day begins at sunset in accordance with Old Testament practice (not at midnight as in civil time measurement), so the difference between Athonite time and ordinary time is not a fixed offset. Since sunset time varies by season, clocks showing the Byzantine time have to be continuously readjusted. Currently, they are readjusted once a week, usually on Saturdays. Daily prayers begin three hours before sunrise.

After our abrupt early awakening, we walked a mile downhill to the capital, Kares, a small village with souvenir shops and a café. This café turned out to be the meeting spot for transport between monasteries. While English got us by, all answers were punctuated with “perhaps,” “possibly,” and “maybe.” We soon realized that it was essential to ask more than one person the same question in order to get the correct answer. This would be madness for anyone desiring certainty. After asking various people, we deduced that a van would leave for the Mega Laura monastery in four hours. Or so. Maybe. A van eventually arrived to take us and others, packed like sardines, to the tip of the peninsula under the holy mountain itself, for our second monastic night. 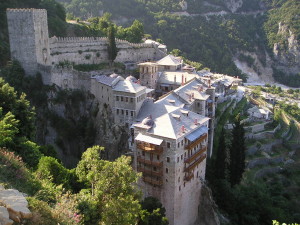 Aerial view of one of Mount Athos’ 30 monasteries.

The following day, we found ourselves back at the same café for another long and uncertain wait for transport to our third and final monastery, Ano Vatopediou, dating back to the 5th century and the largest monastery with about 125 monks in residence. There we met Peter Mathew, an American monk from Wisconsin, who talked to us at length about life in the monastery and showed us several revered icons and relics, including bones of prophets, one dried-up ear, parts of the True Cross, and the Virgin Mary’s belt. These items are reputed to be responsible for many healing miracles. Here we first heard then witnessed the late afternoon ritual of a monk carrying a semantron, a 12-foot-long wooden plank held perpendicular to his body, which he banged repeatedly. Semantrons predate and substitute for bells as a call to worship. Interestingly, Prince Charles has visited Ano Vatopediou numerous times, though his accommodations there are far more comfortable than our dormitories.

On our final day, we returned to Daphines for our boat ride back to Ouranoupolis. In spite of our reservations, it took most of the day, a great deal of perseverance and even pushiness (which seemed to be standard operating procedure), before we could find space on a returning ferry. But like all our adventures on Mount Athos we somehow made it work. We will never forget our time there. Like most great travel experiences, it was uncomfortable and difficult and I would never do it again. But it was a unique and priceless memory that I would not trade for anything. 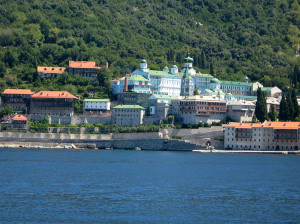 The Holy Mountain at Mount Athos

In the end, the trip was an experience like no other. For 1,000 years Mt. Athos has been a reclusive self-contained enclave, and as an autonomous polity has its own parliament and laws. It is well-policed to keep outsiders and women away. The number of pilgrims daily is strictly limited and controlled. It is a man’s land. Even in the chapels, almost all icons feature depictions of male saints with only a rare Virgin Mary. Both room and board at all monasteries are free.

If you go, keep your list of pre-arranged monasteries with you as you will need to show it to people in order to be directed to the right spot, though prior arrangements did not always seem to be confirmed and most monasteries would probably take you in anyway. It is a good idea to go with a traveling buddy since it will take at least two of you to figure out what to do and where to go. One of you will hear one thing and the other will hear something else entirely. Vans are the only means of transport and they leave only once a day from the monasteries, at the crack of dawn. There are no tour guides. Your pilgrimage is strictly by the seat of your pants. Which, by the way, excludes shorts – as conservative dress is required. Speaking quietly at all times and showing up for prayer before meals are proper behavior.

Some pilgrims buy walking sticks and hike between monasteries. Some climb up the peak of the Holy Mountain to its summit (2,000 meters high) and spend the night in a small chapel. The gates of the castle-like structures of the monasteries close about 8:00 PM at night. Tap water on Mt. Athos comes from natural springs and is safe to drink. Cat lovers will be delighted to see numerous healthy cats at each monastery. One should allow at least a full week for this visit, including an initial night or two in Ouranoupolis and at least one after your pilgrimage. 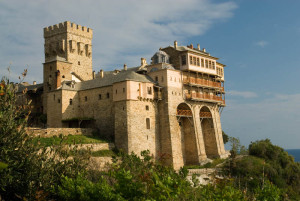 The stone walls of Stavronikita monastery at Mount Athos, face the rising sun.

Finally, in my personal opinion, Mt. Athos has much more to offer than the Vatican. It features simple monastic life, not tourist-filled monumental buildings, and is the ultimate locale in which to completely escape from modern life and to reflect on one’s needs. Though anyone of any faith can apply to visit, BBC has tried without success for 40 years to produce a documentary on Mt. Athos. Going there is not for everyone. We returned to Ouranoupolis filthy and unshaven and hungry, physically worn out from our experience but rejuvenated in spirit. Light-weight tickers who only touch airports in their traveling will never imagine what they missed.  This visit to Mt. Athos was truly a highpoint in my travel experiences.