The Kamchatka Peninsula, part of The Russian Federation, extends from the northeastern end of Siberia, thrusting down to divide the Sea of Okhotsk from the Bering Sea. It is one of the few truly unexplored wilderness areas left in the world. Sharing a latitude with Alaska, it is remote and difficult to get to. Conditions are so harsh there for most of the year that the human population is sparse and primarily concentrated in Petropavlovsk, its capital. A few small fishing villages exist on its shores, but the interior of Kamchatka remains largely unexplored. 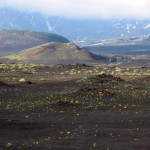 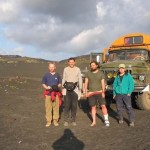 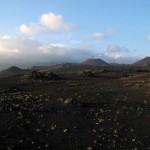 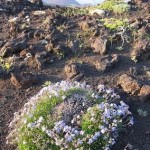 The sparse landscape of the Kamchatka peninsula. 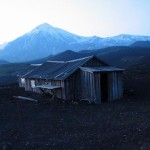 A home on the Kamchatka frontier. 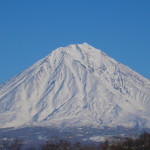 Petropavlovsk-Kamchatsky with Koryasky volcano in the background. 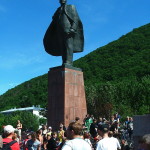 Petropavlovsk-Kamchatsky with Koryasky volcano in the background.

My trip to Kamchatka in July of 2004 began with a scheduled flight from Anchorage, Alaska, to Magadan, Siberia, via Magadan Air. The flight, on a Tupolev 154, arrived in Magadan 7½ hours after leaving Alaska, partly because the schedule included a landing at Petropavlovsk (which we would later reach by ship), where we sat on the plane for an hour and a half before proceeding to our destination.

Magadan, a dreary city adorned with endless Soviet 5-story block apartments that don’t appear able to withstand a 3-pointer on the Richter scale, is nonetheless full of Siberians proud of their city and their heritage. 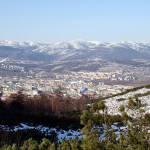 View of Magadan from the mountain.

After our tour group boarded the Clipper Odyssey, we were treated to a city tour that portrayed the history of Magadan as a story of gulags and human suffering in extreme conditions. Later that evening we sailed from Magadan to begin our exploration of the Sea of Okhotsk.

After three days we arrived at the Kamchatka Peninsula and continued sailing along its coast. Eventually, we rounded the southern tip of Kamchatka and headed north through the Bering Sea to Petropavlovsk.

From Petropavlovsk, one has access to the areas of Kamchatka that can be reached by helicopter. Few year-round roads exist for any great distance from Petropavlovsk, though it is possible to drive through Kamchatka in the winter when the boggy tundra has frozen solid.

The landscape of Kamchatka, part of the Pacific Rim of Fire, is dotted with 160 dormant and 29 active volcanoes. The area is untouched by the excesses of modern man, remaining primarily pristine tundra and taiga forest. Still, from the base of Petropavlovsk, a seemingly endless list of activities can be enjoyed.

There is birding, hiking, mountain climbing, fishing, hunting, studying geology, both downhill and cross-country skiing, rafting, observing wildlife (from small mammals to Russian brown bears) and just enjoying nature’s rainbow of colors. This is one of the few places left in the world where one can experience vast areas of nature existing as they always have. 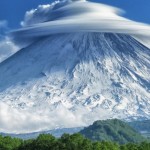 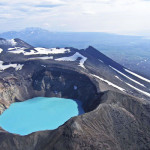 Valley of the Geysers:

There is less than a handful of places across the Earth where hydrothermal activity displays itself as dramatically as it does in the Valley of the Geysers, located in the Kronotskiy Nature Reserve. Unfortunately, the weather was poor the day we were scheduled to visit.

Our group, led by Zegrahm Expedition’s “Terrific Troika” — Mike Messick, Shirley Metz and her husband, Peter Harrison — took an hour’s bus ride on poorly maintained roads to the heliport outside of Petropavlovsk, then waited several hours for the weather to clear. At last, the okay to take off was given.

Our hour-and-15-minute scud run, covering approximately 150 miles, took us first across virgin forests and tundra in the full bloom of the short Kamchatka summer. Vivid greens below us were traversed by countless rivers and streams of all sizes meandering in graceful loops and curves across the landscape. We then paralleled the Pacific coast briefly. For the last 15 or 20 minutes of our flight we headed away from the coast, soaring between ancient volcanic mountains eternally covered with snow and ice. It was spectacular.

Eventually, our whirlybirds settled down onto wooden pads next to a log cabin resembling a small Swiss chalet perched on the steep side of the valley. We were greeted by clouds of relentless Kamchatkan mosquitoes as well as by the staff of the nature reserve. They split us into two small groups and led us down wooden walkways into the valley to see the geysers. As soon as we descended below a certain point, the smell of sulfur hung in the air. Though it was not overpowering, it seemed to be a deterrent to the mosquitoes, as they did not follow us any farther.

We spent the next hour and a half in awe, exploring the 6-square-kilometer fumarole field with informative commentary from our guides.

Valley of the Geysers in Russian Kamchatka.

The Valley of Geysers , Kamchatka 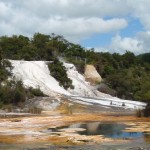 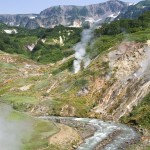 The Valley of Geysers , Kamchatka 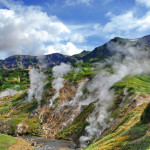 The Valley of Geysers, Kamchatka 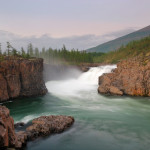 At the Valley of the Geysers.

The wooden walkway made a large loop through the main geyser field, at times going down many steps to lower levels. Every few feet, as the walkway wound its way across the flatter areas and then down, we were greeted by new vistas.

The area was thick with geysers of all sizes and all types: small ones, larger ones, geysers that erupted almost continuously, others that came to life on no set schedule and others that erupted at regular intervals. Some sprayed out at an angle, others shot straight up in the air. One, in particular, by depositing its residue, had built a small grotto overhanging a stream.

There were hot springs whose waters ran down the sides of the valley, creating rivulets and small waterfalls while leaving trails of colors on the rocks. Nestled in one corner were several bubbling pots of colored mud. And wherever plant life could, it thrived in the form of lush green grasses, blue flag irises and chocolate lilies, adding to the exotic beauty of this magical valley.

At the very bottom of the valley, a large, swift stream carried clear snowmelt hurriedly away, adding yet another element of sound and beauty to the scene, while a glance to the top of the surrounding mountains revealed the snow itself.

After completing the loop, marveling at every step, we commenced climbing back up the side of the valley. Before coming completely out of the geyser field, we came across another walkway heading straight back down almost all the way to the river below. A few of us trekked down to a small platform where we watched a “regular” geyser (one with a predictable schedule of eruption) shoot up 15 or 20 feet in height.

In the same area, we saw a large open pit where water bubbled. As we watched, we noticed that the bubbling seemed to become more forceful. Patiently, we waited. Before long, the bubbling became somewhat frantic and water began to overflow from the pit. Then, gradually, the geyser began to erupt higher and higher until eventually it reached its peak, spraying a good 40 feet or more into the air in a spectacular display that lasted several minutes. Steam and mist settled all around us. We felt very fortunate to have witnessed this special, very irregular, very dramatic geyser in action.

After completing our exhilarating tour of the geysers, we were treated to a fabulous lunch in the chalet. The table was loaded with salmon eggs (delicious), excellent smoked salmon, good hearty bread, good cheese, and plates covered with sliced cucumbers and tomatoes, both obviously vine-ripened and superior to anything I could buy in a grocery store back home.

After stuffing myself on these items, the actual meal was served, featuring large planks of grilled salmon, corn and rice. The meal was far more than we had expected and was truly a delicious treat.

After the meal, our helicopters took us back to Petropavlovsk. Even though we were covering the same ground we had traversed earlier, we were careful to sit on the same side of the helicopter as before and thus were treated to different views of the landscape.

Soaring very close to the mountain peaks on either side, we could see the lush vegetation and bright snowfields contrasting sharply with each other and with the dark volcanic surfaces of the peaks. Later, at least one moose was spotted on the flat tundra by a passenger.

We arrived back at our ship very late, tired but exuberant, knowing that we had witnessed one of the Earth’s hidden treasures — definitely the highlight of our 2-week trip.

Kamchatka is a unique peninsula filled with ecological gems. It survives to be studied and enjoyed by all. It is unique. Though adjacent to Siberia, it should not be confused with it. It is a very independent maritime region with its own character and should be considered a destination all to itself.

Zegrahm Expeditions’ 15-day “Wild Siberia II: Magadan to Petropavlovsk,” aboard the Clipper Odyssey, starts at $7,690 per person. The helicopter excursion to the Valley of the Geysers is optional ($390 per person).

On July 31, 2½ weeks after we disembarked, the Clipper Odyssey ran aground in the Aleutian Islands, reportedly on uncharted rocks. A fuel tank was ruptured, spilling 5,000 gallons of diesel fuel into the Alaskan waters. All passengers and crew were picked up by Good Samaritan fishing vessels and a freighter and carried to safety.

According to Zegrahm Expeditions, the ship has been fully repaired and is “running perfectly,” having been used on several expeditions in October and November ’04.