In July I took Oceanic Society Expeditions’ tour to Midway Island and not only had a great time but experienced several “firsts.” 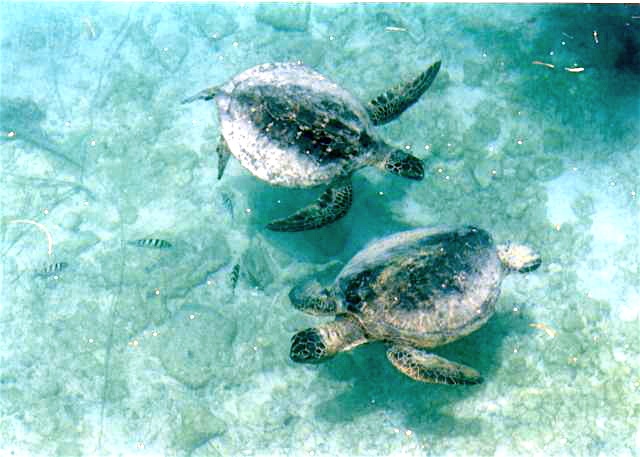 Pair of turtles in the shallows at Midway Island

Midway Island has a great deal to offer the fisherman, the scuba diver, the naturalist and the history buff.

When you arrive, you will be met by a representative of OSE who takes you to a very comfortable, 3-story, former military accommodation. You’ll need to wake up early the next morning because the cafeteria opens at 5 a.m. and closes at 7 a.m.

You’ll spend the next two days absorbing information about Midway Island — Past, present and future.

I was fortunate my first day to witness the departure of the last members of the U.S. Military. Before leaving, the Air Force gave us a tour of their giant cargo aircraft, the C5A, America’s largest plane. They then taxied the giant aircraft down the runway while other vehicles cleared the airstrip of fledgling albatross.

As the the Air Force rolled down the runway, the Phoenix Corporation and Department of Fish and Wildlife Service took charge.

Those travelers and soldiers who in the past had stopped at Midway only to refuel their planes have no idea what a great time they could have spending a couple days there. Where else in the US can you get a 25-cent beer and a 5-dollar massage?

All the inhabitants, from the doctor to the researchers and many foreign nationals, are extremely friendly and informative and proud to be on Midway. James from the Department of FWS gave us several tours concerning different aspects of Midway, such as its military importance and its ecological significance. James was very enthusiastic and very well versed. 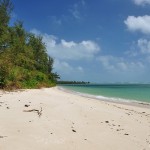 Midway is the first of the Hawaiian chain of islands. There are beautiful white, sandy beaches to be explored, but if you go into the water do look out for tiger sharks.

You may spend hours walking the many pathways — littered with gooney birds — to visit a nuclear fall-out bunker, or see the cable station that made possible the first around-the-world telegraph message. 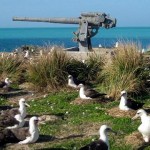 Goonie birds hanging out near a gun at Midway Island. 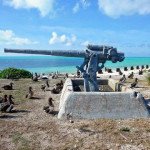 Dancing goonies as the sun goes down. 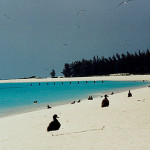 Goonies on the beach

The island has very few vehicles, as most people ride bikes or golf carts. One thing that stands out in a most peculiar way in this remote Pacific atoll is that everyone has a cellular phone. They even communicate across the dining room using the phone.

Besides watching the military leaving, I witnessed many other firsts. 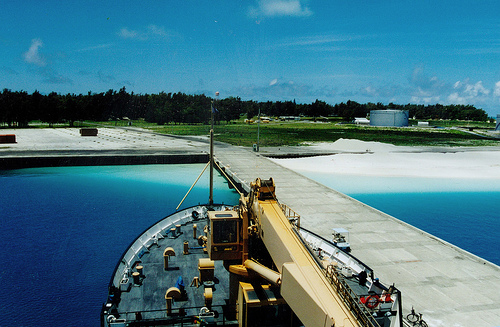 I saw the first yacht arrive in Midway. I saw the spot where the first Medal of Honor was earned during WWII by a U.S. Marine officer. I saw the place where President Nixon and South Vietnamese officials met in secret.

Cynthia of Oceanic Society Expeditions gave us extensive tours of the island and the albatross habitats. I was shocked to see the extensive amount of plastic consumed by these birds, mostly in the form of plastic lighters.

Most likely, though, I will recall Midway Island every Easter Sunday, as Midway is the location of the last Easter service each year. Some of the locals are planning to fly to Tonga next year for the world’s first Easter service of the year and then fly back across the international date line to attend the last service — another possible first. 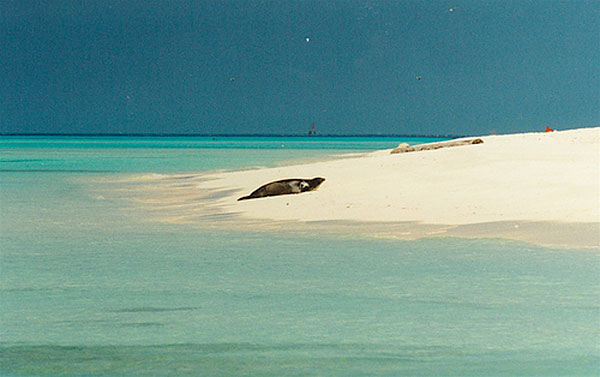 As our Gulfstream jet departed Midway atoll, I could see the rare Hawaiian monk seal sleeping on the beach… and I knew he was in good hands.

"When it comes to friends, you only get a few of t

Trip back in time three years to the magnificent a

The past is gone, the future is not guaranteed, th

Some of my favorite views from my recent road trip

Your expectations are keeping you unhappy, here's

The emotional domain we share with others is a dir

Never before thought that the greatest health "hac

One day I will find the right words, and they will

My heart feels so full of gratitude that it might

Sunset at Thuyen Lam pale in the mountains of Sout